Known as the roof of the world, Tibet is a historical region in Inner Asia which covers the majority of the Tibetan Plateau. A majority of Tibet’s land is situated at an altitude of over 4000 m and for centuries the land has stayed isolated, but now, the land is finally seeking to find its place in the twentieth century. As of now, tour in Tibet is not only opening up to the outside world but has also become one of the most desired places to visit.

However, Tibet houses poor to non-existing infrastructures which make the land unpredictable and adventurous. Totally different from modern society, Tibet has a lot to offer to the people, a once in a lifetime experience. It is very rich in both natural and scenic beauty making it a must-visit destination.

So, with an aim to slowly uncover the many secrets of Tibet, we at Great Nepal Treks & Expedition have come up with numerous packaged based in Tibet. What are you waiting for? Hurry up, book a package and travel to the land of mystery, Tibet.

To date, the history of Tibet is a big mystery. There are little to no detail about the mystery land. However, Tibet’s history is closely tied to Buddhism as the religions played a huge role in the development of Tibetan and Mongol cultures. Likewise, the majority of the land’s native historians were Buddhist monks which shows the influence of Buddhism on the Tibetan land.

Tibet consists mainly four seasons as spring (April- May), summer (June –August) autumn falls from September to October, and winter from November to March. However, the climatic conditions of Tibet are quite similar to a typical plateau climate as Tibet lies at a very high altitude.

On the other hand, locations like Lhasa are ideal for traveling as it has moderate temperatures and cool air.

The best time of visit Tibet is from April to October as the weather is neither hot nor cold.

How to get in Tibet?

Majority of Tibet’s festivals are highly influenced by Buddhism. While Tibet has different festivals all year round, the majority of them are religious. One of the most significant religious festivals in Tibet in the Saga Dawa Festival. Celebrated on 15th April each year, it extends for a month. The locals circle around religious sites while the monks chant in the monasteries and the locals dance and enjoy the moment.

Likewise, Tibetan New Year, also known as Losar is also a very important festival in the region. Tibetan New Year is celebrated in 29th December and is one of the many entertaining festivals of Tibet.

Lifestyle and Culture in Tibet

Tibetans are the people believed to have learned to sing before they started speaking. The lovers of dancing and singing are very warm and hospitable.

In Tibet, the majority of those living in the grasslands live in large tents. The moveable tents allow the locals to migrate to greener pastures for their livestock. While the tents are very simple at first sight, they are very complicated and are gorgeous

Moreover, others who live in other areas of the country live in wooden houses. These houses are covered with Buddhist carvings and are decorated with bright colors. Likewise, when it comes to attire, Tibet’s traditional clothes are very unique, designed especially to adapt to the harsh weather. Tibetans usually wear clothes which are made from silk, sheepskin wool and cotton to keep themselves warm. The sleeves of the traditional dresses are longer which allows them to look better while dancing.

Finally, talking about their diet, the Tibetan diet has four treasure tsampa, butter tea, beef and mutton, and noodles. Meat is a staple in their diet but they only eat beef and mutton. They do not eat dogs as they consider them dirty and they do not eat fish because they worship fishes as gods of the water.

To travel to Tibet either by air or land, an individual must carry a Tibet Travel Permit, also known as Tibet Visa, and a Chinese Visa as per the law of the People’s Republic of China.

Moreover, you need to contact a travel agency before receiving these permits. So, make sure to contact our operators to know more about the procedures.

Trekking and Hiking in Tibet 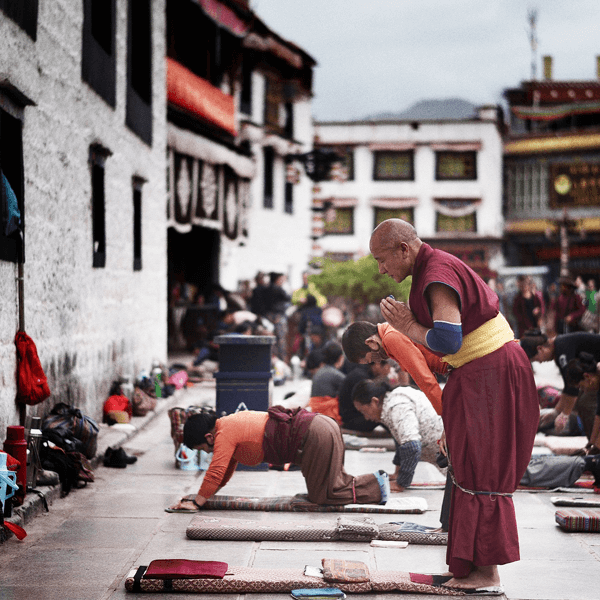 Religious and Spiritual Tour in Tibet