BHUTAN, also known as ‘The Land of the Thunder  Dragon’ is known for its stunning landscapes, legendary ancient temples, happy and friendly people, spicy yet delicious food, colorful festivals and most of all its authenticity. It is the last remaining Himalayan Buddhist Kingdom. So peaceful, serene and blissful that it will rejuvenate your mind and make you feel relaxed and happy.

Bhutan even regulates tourism in the country so as to safeguard its pristine beauty and way of life. Visitors are only allowed to travel as part of prearranged package tours and are charged a minimum fee of $250 a day – the fee though is all-inclusive and takes care of your Hotels, food, sightseeing, taxes and transport. Backpackers and independent travelers are discouraged. It still remains elusive & exclusive with not more than 100,000 tourists in a year.

Bhutan has four seasons, Spring from March to May, Summer from June to August, Autumn from September to November, and Winter from December to February. However, the climatic condition of the land highly depends on the altitude. In the Northern parts, the mountains rise high up to 7,000m, and the climatic condition is often very cold, similar to that of the Arctic. But as you head towards the Southern side, the conditions get hotter and humid, similar to that of India. Summer in Bhutan is very hot and humid, winters are extremely cold, and the monsoon rains are quite heavy. If you are planning to explore the lower lands or the Southern part of Bhutan, winter is the best time but you will not be able to travel higher as the mountains are freezing during the time. Overall, the best time to visit Bhutan is spring and autumn which are dry, warm and sunny. While it is quite warm during the seasons, it is always wise to pack some warm clothes regardless of the season.

How to get in Bhutan?

As of now, Bhutan only has one Internation Airport which is located in Paro. Likewise, only two airlines, Drukair, and Bhutan Airlines operate flights to Bhutan and the departure points are as follows:

Other than airways, an individual can also travel to Bhutan via the Indian overland by road. The main border crossing in Jaigon Phuentsholing the others are Gelephu and Samdrup Jongkhar. In the current context traveling to Bhutan is quite pricey, unless you are from one of the three selected countries, India, Bangladesh, and the Maldives. Despite the price Bhutan is gaining more and more attention from avid travelers from all around the world and the natural and cultural beauty the country has to offer is beyond any price tag.

The name Bhutan comes from Sanskrit word ‘Bhotant’ which means the end of Tibet. While others claim that the name comes from ‘Bhu-uttan’ which means ‘high lands.’ To the world, the country is known as Bhutan but for the natives themselves, call their land Druk Yul meaning The Land of the Thunder Dragon.  The history of the Kingdom dates back to 747 A.D., and it is believed that Guru Padsambhava flew from Tibet, across the mountains on a Tigress’s back and arrived in Paro Valley.  The Kingdom is a majestic place and has a history that lures everyone.

Bhutan is indeed a country very rich in cultures and traditions. Matter of fact, Bhutan celebrates at least one festival in every month of the year, excluding December. While there are only a few months like March when there is only one festival, other months are all about the celebration of festivals, ranging from Rhododendron Festivals to Bhutan International Marathon. Meanwhile, the majority of these festivals are celebrated in all districts of Bhutan and the guru who introduced Buddhism in Bhutan, Guru Rinpoche is also honored. The festivals are mostly celebrated according to the Bhutanese calendar during the auspicious days and months. The Bhutanese festivals are something to look forward to as they are a big family and social celebration, and people dress in their best attires and jewelry of turquoise and corals.

Lifestyle and Culture in Bhutan

Bhutan’s culture and lifestyle are highly influenced by Buddhism, and it is quite similar to that of Tibet’s. Since the very early days, Bhutan’s culture and lifestyle are linked to farming and animal husbandry while making time to visiting and worshipping at monasteries. Bhutanese are widely known to follow the Buddhist calendar, and as per the calendar, they pick an auspicious month to go on a pilgrimage every year. Both men and women in Bhutan sport their cultural attire, Bakhu which is silk and satin with woolen garments. The only difference is men wear head gears while women do not. Likewise, women in Bhutan keep their hair short and with their bold look, they wear their traditional dress and look radiant as ever. Bhutanese also tend to keep holy threads of necklaces with themselves and prayer count during their free time. Some even carry praying wheels which are often made of wood, bronze or silver. Now, talking about the food, Bhutanese food is quite similar to Tibetan food, including a lot of vegetables, meat products and much more. But one of the most popular Bhutanese dishes is loaf-momo (dumpling) noodles. Bhutanese tend to be very close to their old culture and traditions and believe in living in harmony of nature.

For people carrying passports of India, Bangladesh or Maldives, they can easily get visa of Bhutan on their arrival at the Bhutanese airport without any processing. However, for all the other people in the world, you will have to apply for a visa beforehand. For the processing, an individual will have to send a clear photocopy of his/her passport before 15-20 days of travel date. The visa is processed by the Tourism Council of Bhutan (TBC), and once all the procedures of fees and other procedures are complete, the visa clearance will be processed within 72 hours (working).At the entry point of Bhutan, you will present your visa clearance letter to the authorities, and the visa will be stamped into your passport at the same time. 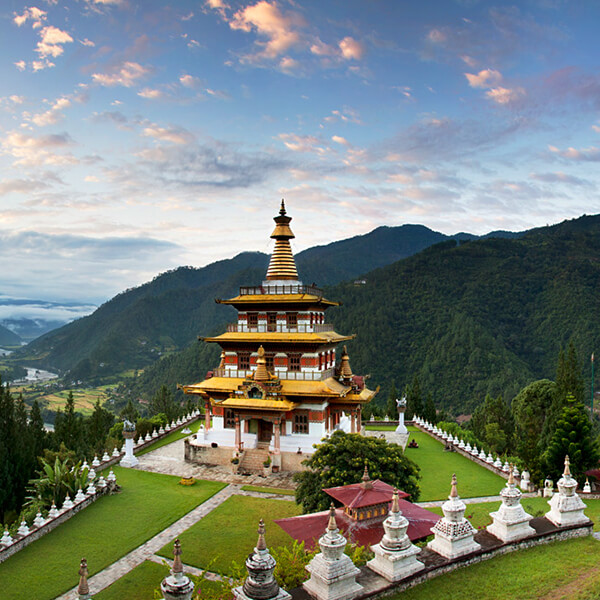 Cultural Tour and Sightseeing in Bhutan

Trekking and Hiking in Bhutan