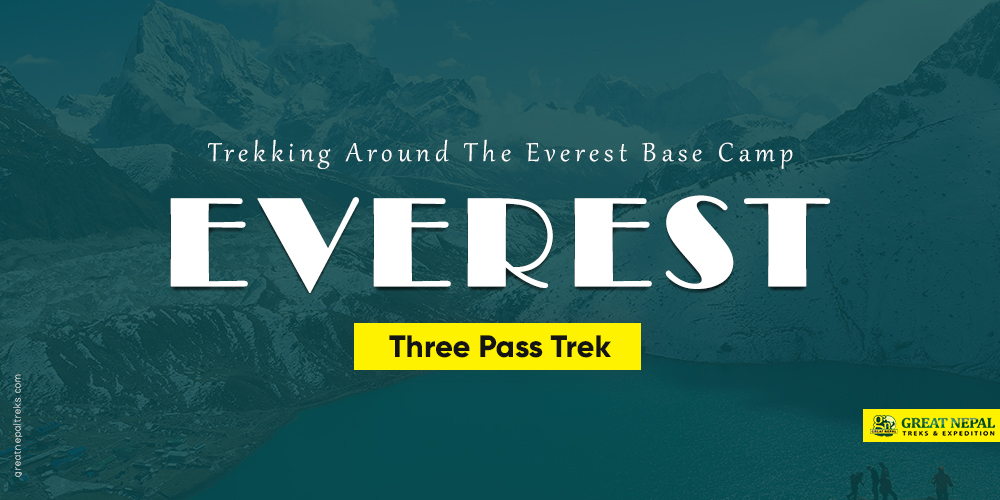 When it comes to trekking in the Everest region, the first thing that comes to anyone’s mind is the Everest Base Camp. Without a doubt, it’s the number one attraction among all the other attractions that one can come across in a trekking journey, no matter what region you’re trekking in. It is every trekker’s dream to visit this place at least once in their life, and that is a fact. There are so many ways to reach and explore the Everest Base Camp, and one of them is Everest Three Pass trek.

Everest Three Pass is undoubtedly the toughest trek in the region. During the journey, the trekkers are needed to cross three high altitude passes, all of the above 5000 m in elevation. The passes are Kongma La, Cho La, and Renjo La. As the trek has so many attractions, and major destinations from all the three treks, the duration of the trek is excruciating. Altogether the trekkers have to walk for a duration of 16 days. Throughout the trek, the trekkers get to rest and acclimatize for 3 days.

Needless to say, as the journey takes you to such high altitude and extreme terrain, walking on the route may not be a piece of cake for quite a few people. Now, while all these attributes make the trek challenging, they also add this sense of adventure and excitement to the journey. These are the features that make Everest Three Pass trek special.

As the trek extends beyond Everest Base Camp trek and Everest Gokyo Lake trek, you come across numerous villages that are not covered in those journeys, namely Chhukung, Dzongla, Thagnag, and so on. You will also get to ascend ChhukungRi, which is another mini mountain of the region.

Another major attraction of the trek is Kala Patthar, which is basically a mini mountain. During the journey, the trekkers climb to its top for the most amazing views of the peaks in the Everest region. The views from here are even better than Everest Base Camp. You’re able to enjoy the views of mountains like Cho Oyu, Nuptse, Thamserku, AmaDablam, Lhotse, and so on from here. If you want to click the best Mt. Everest Summit Photos, well, this is the place for you.

Everest Base Camp trek is also rich from a cultural perspective. The majority of people in the Khumbu region follow Buddhism, which is evident by the fact that throughout the route you will find elements representing the religion, such as gompas, stupas, chortens, prayer wheels, and so on. One of the most significant Buddhist heritages in the region is Tengboche Monastery, which is located In Tengboche.

Another crucial attractions of Everest Base Camp trekking are the numerous villages that you’d come across during the journey. These settlement areas, namely Lukla, Phakding, Pheriche, Gorakshep, Dingboche, and so on, offer you great natural setting to observe and stay in. The people here, with their lifestyle, are sure to amaze you. The most significant one among these villages is Namche Bazaar. It is a town which is also known as the gateway to Everest and is the home to the busiest markets in the Everest region.

Everest Gokyo Lake trek is yet another medium for a traveler to trek around the Everest Base Camp. The trek takes you to the serene Gokyo Lake. It is complex of high altitude mountain lakes considered to be situated at the highest elevation in the world. The water in the lakes comes from Ngozumpa glacier, one of the prominent glaciers in the Himalayan region, located at the base of Cho Oyu. Among all the lakes in the complex, Gokyo Lake is the major one, however, the largest one is Thonak Cho.

Gokyo lake is religiously significant for both Hindus and Buddhists. There is even a temple at the western shore of the lake. During the trek, the travelers also get to visit Gokyo village, which is the nearest settlement area to the lake, and the most serene one. The trekkers also get the opportunity to climb Gokyo Ri, yet another essential mini-mountain of the Everest Region.

When you go on the Everest Gokyo Lake trek, you come across a few of the most beautiful villages in the region, namely Phortse, Machhermo, Thame, Dole, and so on. These settlement areas are exclusive to the Gokyo Lake trek route, and like other villages of the region, they are full of local indigenous people, with their rich and unique cultures and lifestyle. In comparison to the two other treks in the region, this one is shorter, easier, and therefore, suitable for all kinds of trekkers.

Everest Expedition is not for everyone. A lot of people compare trekking and expedition and believe the latter one to be a more extreme version of the former one. Well, expedition is definitely more extreme than trekking, but it’s nothing like it. To go for an expedition, a person needs to have completely different skillset, and experience, concerned with mountaineering, and especially the endurance to sustain the extremely high altitude. Moreover, climbing Everest is next level mountaineering, as, it is one of the most difficult and overwhelming peaks to climb in the world.

Of course, Everest Expedition offers you the thrill and excitement that no other journey in the world can, and so, if you have the required skills and resources, you should definitely go for it. Everest Expedition is a 64 days long journey, out of which, 45 days are spent trying to climb the peak. The climbers also need to trek for around 14 days, i.e. to go from Lukla to Everest Base Camp and back. The remaining days are spent relaxing, either in Kathmandu or in the Everest Region.

Despite the fact that Everest Three Pass trek is a challenging one, it’s also the richest trek in the region. All the journeys in the Everest region take you through Sagarmatha National Park, and if there is a trek that lets you explore the park in the most detailed way, it’s the Everest Three Pass trek. So, it’s not just Everest Base Camp that gets the trekkers get excited about while going for this journey, but all the other attractions as well that are featured in the Sagarmatha National Park. From the rarest species of animals, birds, and insects, to the most interesting vegetation, you’ll find it all here.

If you have the zeal and passion for trekking, and the need for thrill and adventure, Everest High Pass trek can prove to be the right option for you. Go for it to experience Everest in its true form. Trekking will not be the same for you after you’ve walked on the Everest High Pass Trek route.

Great Nepal Treks and Expeditions is an experienced, and therefore, a trustworthy trekking and expedition company that offers the most amazing packages to its clients at the most affordable cost. Their primary objective is client satisfaction, and so, all their efforts are driven towards giving the travelers the best experience of their lives.