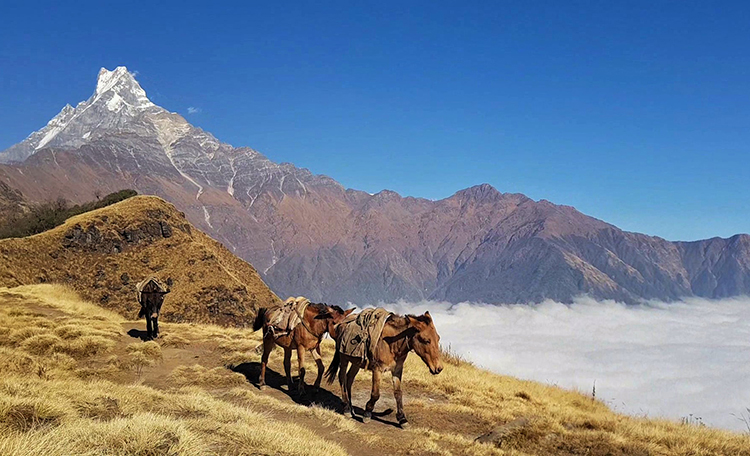 Nepal’s tourism sector is booming as more Nepalis set out to explore their own country. Travel trade entrepreneurs said that after the earthquake of 2015, domestic adventure seekers started travelling across the country in droves. This year, many adventure, pilgrimage and sightseeing destinations have been seen bustling with domestic tourists. According to Sudan Subedi, senior officer at the Nepal Tourism Board, there is no survey on domestic tourism but based on the registration, sales of tickets and revenue collection across the country, an estimated seven million Nepalis set out to explore the country this year. He said that social media played an important role in influencing travellers behaviour. Kathmandu has even been ranked 5th on the Lonely Planet’s top 10 cities to visit in 2019. Based on social media trends and destinations featured by the Nepal Tourism Board, we have listed 10 of the most life-defining destinations in Nepal for 2019 that will surely make you fall in love with the location several times over.

Mardi Himal Trek is off the beaten track in the Annapurna region. It is located east of the famous trekking trail to the Annapurna Base Camp. It is a four to six day trek from Pokhara that offers magnificent views of magical forests, Himalaya ranges and abundance of fresh air. While trekking on this route, you will be able to move past green forests, tea shops with basic facilities and witness astonishing views of Mt Annapurna, Mt Machhapuchre and Mt Hiunchuli. Mardi is located at an altitude of 4,500 metres. Mardi Himal Base Camp, located beneath Mt Machhapuchre, can be reached through three routes—Kande, Dhampus and Sidhing. There are simple guesthouses and homestays along the entire route. The best time to trek Mardi Himal is from mid-September to mid-November and March to May. It can be trekked during the winter December-February period as the skies are clear but due to very cold weather, there is a risk of passes being closed due to snowfall.

Rara Lake, the country’s deepest freshwater lake in Mugu district, has been attracting domestic visitors for the past few years. Until recently, Rara used to receive only a handful of visitors, but it has been gradually gaining popularity among Nepalis. According to the Nepal Tourism Board, hundreds of Nepalis have started visiting the lake. However, very few foreigners make the trip to the lake.

The easiest means to reach Rara is to take a flight from Nepalgunj to Mugu, followed by a four to five hour walk to reach the destination. The best time to visit is during autumn, spring and summer.

The Khaptad National Park is a protected area in the Far-western Region. It stretches over four districts of Bajhang, Bajura, Achham and Doti and ranges in elevation from 1,400m to 3,300m. Spring (March-May) and autumn (October-November) are the best times to visit the park. There are no lodges or hotels in the park. Trekkers must be self-sufficient in tents, food and all other supplies. The Nepal Tourism Board said that social media has also been influencing Nepali travellers to go to Khaptad.

The Annapurna Base Camp (ABC) trek is one of the most popular and affordable trekking adventures in Nepal. Nepalis have fallen in love with the famous ABC trail which offers a short and scenic trek. It provides spectacular and close up views of the Annapurna range, Mt Machhapuchre, Mt Hiunchuli, and Mt Dhaulagiri. In spring, it showcases many beautiful flowers including rhododendron and orchids. Machhapuchre massif and the deepest gorge Kali Gandaki will accompany you during the trek. Domestic tourist movement has been on a gradual rise. According to Annapurna Conservation Area Project, more than 3,000 Nepalis trek to ABC annually.

A brisk walk in tea gardens, tranquil picnics and sightseeing stops, short treks along gentle slopes, or a trudge into the nearby woods-all this and more are offered by Ilam in the eastern hill district. The number of local tourists visiting the hill regions of Ilam district has swelled in recent years. There are more than a dozen hilltops in Ilam which have been gaining in popularity as tourist destinations. Antu Hill is the most popular destination for sightseers for its unmatched views of the sunrise. While the subtropical climate of Ilam ensures good weather throughout the year, the best time to visit Ilam is between October-December or from April-February.

Bardiya National Park is one of the most undisturbed protected areas in the Tarai and is home to the endangered Royal Bengal tiger and Nepal’s famous one-horned rhinoceros. The park located in the far western district of Bardia is bordered by River Karnali in the west, the Churia range in the north, while the River Babai flows right through. Several safari lodges in Bardia provide excellent accommodation and facilities for guests to enjoy wildlife activities. The best time to visit is autumn, winter and early summer when the weather is warm and dry. Bardia can be reached by road via Nepalgunj or by flight to Nepalgunj from where the park can be driven to.

Recently, Kalinchowk has become one of the most trending destinations in Dolakha district. It’s because it offers an opportunity for visitors to enjoy snowfall during winter. It is a famous pilgrimage site for Hindus. There is a cable car service between Kuri Bazaar and Kalinchowk Bhagawati Temple. Kalinchowk is located at an altitude of 3,842 metres and 150 kilometres away from Kathmandu. Kalinchowk was previously the starting point to the Everest Base Camp before the Lukla airport was built.  During the winter (December-February), you will find snow everywhere. Plans are underway to develop Kalinchowk as snow skiing destination.

There are more than a dozen of hotels and a number of dharmashala or pilgrimmes houses operating in the area. These facilities can accommodate nearly 1,000 people a day. Along with the Janaki Temple, other popular sacred places in Janakpur district include Ram Mandir, Shankat Mochan, Rajdevi Temple, Manimandap, Ganga Sagar and Dhanush Sagar among others. The central, provincial and local governments have announced developing Janakpur as one of the main destinations for religious tourism.

A sacred place for both Hindus and Buddhists, Muktinath is located in the Muktinath Valley at an altitude of 3,710 metres at the foot of the Thorong La mountain pass in Mustang. An increasing number of domestic visitors have been travelling to Muktinath. Favourable weather conditions have also led to more people visiting Kagbeni and Muktinath by both road and air routes. Jomsom is a great place to start trekking. The diverse landscapes and cultures found along the trekking routes give marvelous insight into the way of life of rural Nepali people. A highlight is trekking through the gorge carved by the Kali Gandaki River, which originates in the Tibetan plateau to eventually flow into the Ganges.

Trekking to Mt Everest’s base camp is still the ultimate mountaineering adventure for foreigners. To stand at the pinnacle of the earth is one of life’s most rewarding experiences. Now, the adventure is not limited to foreigners as many Nepalis today prefer to trek to the base camp which is situated at an altitude of 5,364 metres. There are no roads from Kathmandu to Lukla—the gateway to Mt Everest, and as a result, trekkers reaches Lukla via plane. From Lukla, climbers trek upward to Namche Bazaar. It takes about two days to reach the village, which is a central hub of the area. They then trek another two days to Dingboche and another two days takes them to Everest Base Camp via Gorekshep, the flat field below Kala Patthar (5,545 metres).