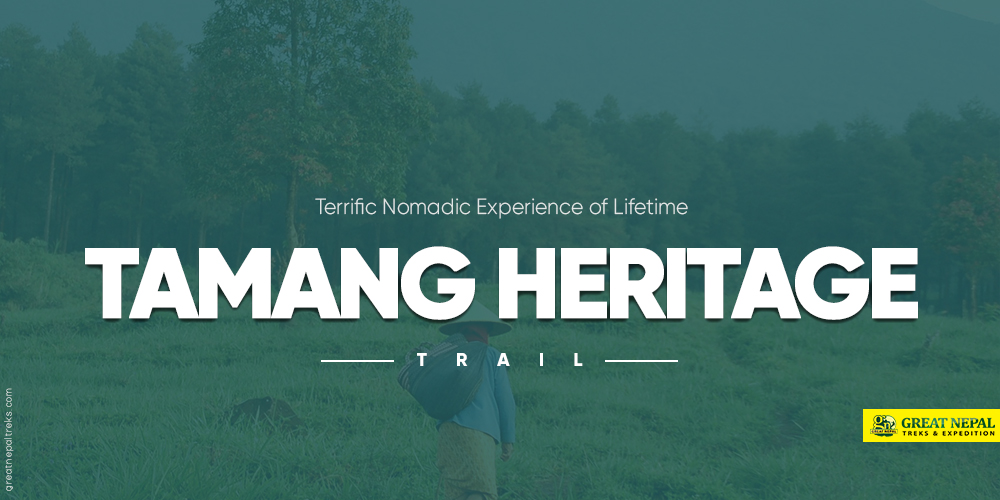 A nomad isn’t someone who doesn’t have a home; it is he who finds home everywhere he goes. Living a nomadic life is finding your roots, and reconnecting them to nature, that we have so steadily lost. Imagine staying away from the cities and the modern civilization, and not just exploring the nature in the process, but discovering who you are. Trekkers who have trekked on the Tamang Heritage Trail have found the experience to be quite similar to the ways of the nomads. In fact, they claimed that the journey offered them the most terrific nomadic experience of a lifetime.

Tamang Heritage Trail is one of the most popular routes in the Langtang region. The route covers numerous villages nestled in the hills of this region, and the majority of the population living here belong to the Tamang community. They are one of the many indigenous tribes of Nepal, with their own unique cultures and traditions. This package is designed to explore the heritage of the Tamang community living in the region, and therefore, the trek has been given the name Tamang Heritage Trail.

Tamang Heritage Trail trek is one of the shortest treks in the region comprising of only 6 core trekking days. Since the trek doesn’t take you to that high of an altitude, no days are assigned for acclimatization. The highest point of the trek is 2607 m, which is the altitude of Tatopani. The villages quite like other villages sharing the same name is known for its natural hot water springs. It is said that these springs have medicinal properties. Legends say that taking a dip in them can cure pain related to bones, muscles, and joints and even many other serious diseases that are considered incurable.

During the trek, the travelers cover numerous villages namely Gatlang, Rasuwagadhi, Briddim, and so on. In all of these villages, you’ll find nature to be at its best. You’ll reach multiple viewpoints during the trek that will offer you splendid views of the surrounding hills, and even that of the mountains in the region. The journey starts at Syabrubesi, takes a round trip along the trail, and ends at Syabrubesi itself.

This trek is best suited for people who want to trek in the hills of Nepal but somehow aren’t able to deal with high altitude, extreme weather, and rough terrain. Since the trek keeps you lower than 3000 m at all times, there’s absolutely no chance for you to suffer from altitude sickness. It’s short so it doesn’t consume much of your time and energy. These and so many other advantages make this trek an ideal choice for first-time trekkers, people with limited stamina and endurance, elderly, and so on. However, this doesn’t mean that experts shouldn’t go for the trek. It may not be all challenging and adventurous, but the beauty of nature and the elegance of the people that it offers makes up for all that.

In the same way, if you’re a person who’s excited to know about world cultures, and love to interact with people from different communities, and learn from them, their way of life, the trek is definitely for you. Since you’ll be spending time in the villages that are dominated by Tamang population, you will have ample amount of time and resources to get to know about them. Their lifestyle, tradition, religious beliefs, customs, festivals, and so on; everything is sure to excite you.

Langtang Trek, which is also known as Langtang Valley Trek, is the most popular trek of the region, and one of the most preferred treks in the country. The journey is known for its picturesque features, may it be the views of the lush green high hills and the great white mountains, the settings comprising of colorful forests, waterfall and rivers with crystal clear water, and the rare sightings of the beautiful birds and animals at a distance, or hidden behind the trees and bushes. What makes Langtang Valley trek rich from the perspective of nature is the fact that the Langtang Trek route is located inside Langtang National Park, which is the first Himalayan National Park of Nepal.

Langtang Valley trek Nepal quite like Tamang Heritage Trail is a short trek and comprises of only 6 trekking days. One day is assigned for acclimatization, and on this day, the trekkers go for ascending TserkoRi, a mini-mountain with an altitude of 5000 m. Reaching the top of the peak will not just offer you a sense of achievement but will also gift you with the most splendid views of the entire region. This is an optional quest, so you could choose to relax or take rest, instead of going for the hike.

During Langtang Valley trek Nepal, you will come across numerous settlement areas. Few of them are Langtang Village, Lama Hotel, Syabrubesi, KyanjinGompa, and so on. Syabrubesi is the starting point of the trek and the ending point of the journey. KyanjinGompa, on the other hand, is the acclimatization point, and a religiously significant Buddhist heritage site. Pilgrims from around the country visit the gompa here and offer their homage throughout the year. In terms of acclimatizing, trekkers can learn quite a lot about meditation and Buddhist principles in general from the monks stationed here.

One of the best things about Langtang trek are the views that you get on the journey. From the numerous viewpoints that are scattered throughout the route, you can have mind-blowing up-close views of peaks such as LangtangLirung, DorjeLakpa, Shisha Pangma, Gangchempo, and so on.

While Tamang Heritage Trail and Langtang Valley Trek are quite sufficient and satisfying treks individually, you can double the fun by combining both the treks.  Going on the Tamang Heritage Trail and Langtang trek together will not just level up the core trekking duration but will also add that sense of excitement and adventure, as you’re getting to experience the attributes of two treks in one go.

You start your trek by walking on the Tamang Heritage Trail. You cross the villages of Thuman, Tatopani, Rasuwagadhi, and finally, reach Briddim. From Briddim, you head towards Lama Hotel, and this is the point where Tamang Heritage Trail meets Langtang Trek route. From Lama Hotel, you follow the Langtang Valley trek route, going up to KyanjinGompa, by crossing Langtang Village, and returning via the same route to Syabrubesi, where the trek comes to an end.

Combining Tamang Heritage Trail and Langtang trek would increase the duration of your itinerary to around 11 days, out of which one day is assigned for acclimatization at KyanjinGompa.

Tamang Heritage Trail is full of side trips and excursion opportunities. You can choose to spend an extra day in any one of the villages, or multiple villages, and take a tour of the region. However, to do so, you would need a Tamang Heritage trail map. Tamang Heritage trail map will not just help you better understand the region, but will also help you stay prepared for the upcoming challenges and attractions, so that you are able to make the best out of the trip. A map helps you trek independently and gives you enough information depending on which you can take your own decision.

Tamang Heritage trail after earthquake, quite like Langtang trek after earthquake, is quite safe for trekking, if we are to talk about the present scenario. Despite the fact that the earthquake destroyed various sections of the route, and wiped out entire villages, mainly Langtang village, it didn’t take much time for the people to bounce back, and reestablish the trekking route as well as the villages. Within one year, everything was up and running, and as a result, the region has flourished tremendously. You can now safely go for trekking on various regions of Langtang like the Gosaikunda trek or Ganja La Pass trek and many more.

Opting Tamang Heritage Trail as your next holiday destination and activity is going to be one of the best travel-related decisions of your life. It is one of those mellowed down treks that is meant for the entire family.  On the journey, you will feel closer to nature than you ever have before, and you will be treated as a valued member of the Tamang community. Tamang Heritage trail is one of the best ways to celebrate human values and nature altogether. You should definitely go for this trek.

Great Nepal Treks is one of the most experienced, affordable and reliable travel companies in Nepal. It offers amazing trekking and expedition packages to the people who seek thrill and adventure in the mountains. Great Nepal Treks guarantees client satisfaction, and so, it lets its clients fully customize their travel itinerary as per their interest. Great Nepal Treks offers tour packages to popular tourist destinations in countries like Tibet and Bhutan as well. Choose Great Nepal Treks as your travel partner if you’re planning to go for trekking, expedition or luxury travel in any of these places.