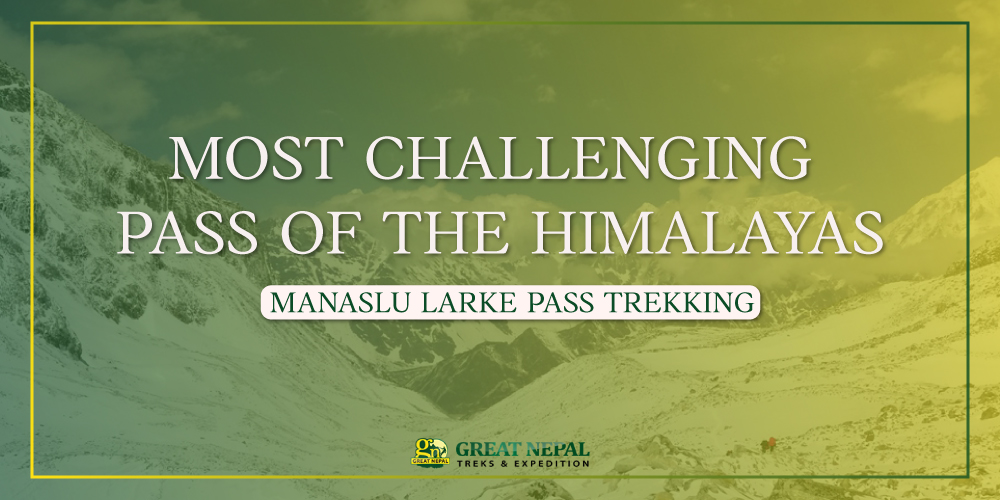 Larke La is one of the major attractions of Manaslu Larke pass trekking. It is a high altitude mountain pass situated at an elevation of 5160 m. It is considered as one of the most difficult to cross passes in the entire Himalayan region. What makes it so tough to cross is the extreme cold and windy atmosphere. If you’re in the area at the wrong time, chances are you’ll be stuck here as long as the weather doesn’t clear out. It is advised that Manaslu Larke Pass trekking should only be attempted in the ideal season, mainly because of the need to cross Larkya La pass during the journey.

Manaslu Larke Pass trekking is also known as Manaslu Circuit trekking, as during the trek, the trekkers walk around the entire Manaslu region. Manaslu Circuit trek, or Manaslu trek in short is an 18 days long journey altogether. It consists of 11 core trekking days. On the 13th day, while making your way from Dharamshala to Bimtang, you’re required to cross Larkya La pass. Needless to say, being at an altitude of 5160 m makes it the highest and the most difficult point to cross during the journey. On the trek, you will cross settlement areas like Tilje, Tal, Syange, Namrung, Jagat, Deng and so on. The entire Manaslu Larke Pass trekking route is a part of Manaslu Conservation Area, which makes it rich in natural heritages and wildlife. Don’t be surprised if you come across rare and endangered species of animals, birds, plants and other creatures during you journey. These attributes bring fun to the journey.

Manaslu Circuit trek route and the entire Manaslu region were two of the many areas that took a serious toll because of the earthquake. The entire villages got wiped away, and the routes were either blocked or erased. Lots of people lost their lives, which included the tourists, the guides, and the villagers. Now, the earthquake had its impact on the rest of the trekking routes across the country as well, but they were quickly able to cope up and return to business.

However, when it comes to Manaslu Circuit trek route, it took the joint effort of the locals, the government and the volunteers almost 2 years to get everything back to order. They had to re-establish the villages, and clean the routes, which was a daunting task overall. But they had the vision to make everything bigger and better, and during the rebuilding process, they were able to achieve that.

As a result, Manaslu Circuit trek after earthquake is totally safe to go for. The settlement areas are now capable of handling quite a large number of tourists, in comparison to what it could in the past. If you go for the trek at present, you’d not even come across a single sign of the earthquake, except the memorials built to honor the dead, and may be a few cracks on the hills.

Tsum Valley trek is one of the most religiously significant treks in the entire Manaslu region, if not the entire country. The treks take the hikers to the infamous Tsum Valley. It is said that in the early 15th century, Guru Milarepa, a saint and one of the prominent preachers of Buddhism, came to the valley and meditated in the caves located in the hills around the valley. This incident contributed to the religious stature that the valley received. Throughout the Tsum Valley trek, you will come across numerous elements that indicate the influence of Buddhism over the region. Structures like chortens, stupas, mani walls, monasteries and so on offer you an enriching experience during the journey. The main highlights of the trek are Mu Gompa, Rachen Nunnery and Milarepa Caves.

Tsum Valley trek is a side trek that deviates from the main Manaslu Circuit trek route. The path, from Soti Khola to Ekle Bhatti, is the same in both the journeys. From Ekle Bhatti, trekkers going on the Manaslu Circuit trek head northwest, and the ones going on the Tsum Valley trek head north east. After reaching Mu Gompa, the trekkers take the same route back to Ekle Bhatti. Needless to say, provided that the trekkers have the required time and resources, they could go for both the treks in one shot.

Manaslu Base Camp trek can be considered more as a side trek than an actual full-fledged journey. Just by adding 2 days to your Manaslu Circuit trek journey, you can include Manaslu Base Camp to your itinerary. During your Manaslu trek, you’ll visit this amazing village called Samagaon. From here, the trekkers generally head north towards Samdo to continue on their journey. To visit Manaslu Base Camp, you’d have to head west from here. It takes a couple of hours to reach there.

The trekkers tend to spend the night at the camp itself, and on the next day, they make their way back to Samagaun. On the third day, finally, they continue on their Manaslu trek journey by heading towards Samagaon. Manaslu Base Camp offers amazing views of the peaks in the Manaslu region, including that of Manaslu itself. You will also get to enjoy the views of Nagadichuli and Himchuli from the camp.

Manaslu Expedition is one of the best journeys that you can go for if you’re into climbing and mountaineering. The entire journey is 46 days long, however, the core duration of Manaslu climb lasts for a period of only 28 days. A large portion of your Manaslu climb journey also consists of trekking. You will be trekking for a period of 11 days. During the trek, you’ll make your way from Arughat to Samagaon before the climb, and all the way back after the expedition. The feeling of reaching the top of the peak is an absolutely unique experience. Manaslu is the eighth tallest peak in the world, but make no mistake, it is not easier to climb that other taller peaks. You would require the same skill and planning to successfully climb on this mountain and reach the peak. Give it a try, only if you have the required skill and the climbing experience.

Great Nepal Treks is ranked as one of the best travel and tour operators in Nepal. What makes their services distinct from the rest of the companies is their tendency to give their clients full control of the trip. They take inputs on the itinerary from their clients, and modify them accordingly. This way, the journey becomes much more personal, and suited to their customers’ needs. Great Nepal treks offer trekking and expedition packages, along with luxury tour packages like helicopter tours and mountain flights. Their itineraries cover the most popular and off the beat tourist destinations in countries like Nepal, Tibet and Bhutan. If you’re looking to spend you holidays in any one these Himalayan countries doing the things mentioned above, choose Great Nepal treks as your travel partner.