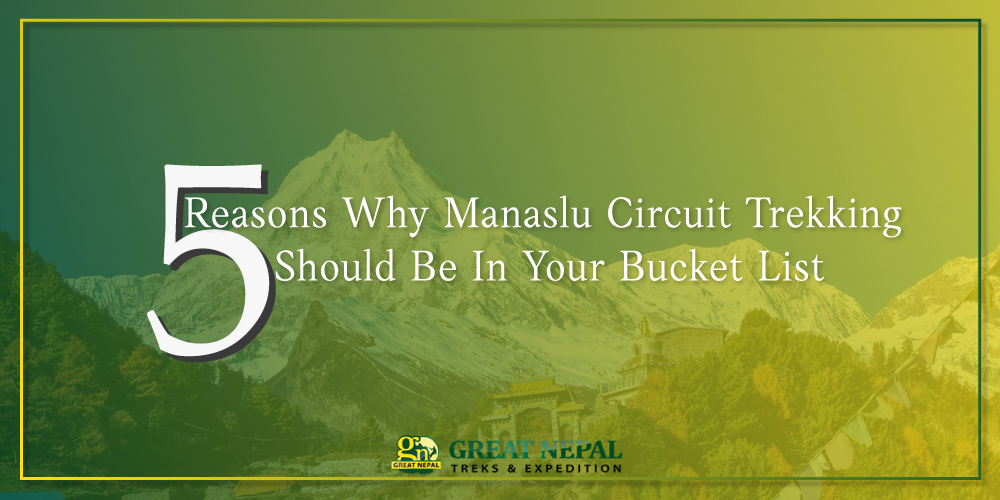 There was once a time when it was prohibited to enter the Manaslu Region. You could enter only if you had special passes. At that time, not many people knew about the charms of this place, neither did they have much idea about Manaslu Circuit Trekking. Couple of decades fast forward into the future and Manaslu Circuit trekking is an activity that doesn’t require much introduction. At present, probably because it’s unexplored in comparison to other more popular routes, trekkers are going crazy at its off-the-beat paths. Manaslu Circuit Trekking is on its way to becoming the most popular trek in Nepal.

Manaslu Circuit trek map can prove to be one of your biggest allies during the Manaslu Circuit trekking. The map will give you an overall idea of the trekking journey. With a map in your hand you’ll be better prepared to face the challenges and enjoy the attractions, as you’ll know during which time of the trek they’ll occur.

Having the information about the areas that you’ll cover will give you the freedom that you need to explore the region on your own. You’ll be capable of designing your own side trips, and independent enough to go for them on your own. Manaslu Circuit trek map will also ensure that you’re on the right path throughout the time, and in case you get deviated, you’ll be well equipped to find your way back to your group or to the next destination.

Manaslu circuit trek after earthquake is completely safe for the tourists to try. Though it took a severe toll during the earthquake, with villages being levelled and the rubbles from the hills blocking the way, everything is back to normal now. It took two years for the locals and the government to bring everything back to order. They had a collective vision to not just reestablish the villages and clearing out the route, but also to make everything larger, so that the region can accommodate and serve more tourists. Manaslu Circuit trek after earthquake, especially at the present, has taken the exact shape as the people envisioned. Everything is so perfectly rebuilt that if you go for the trek, you’d not even find a single trace of the earthquake, except the memorials that were built to honor the dead.

Manaslu Circuit trekking route, moreover the entire Manaslu region is gifted with few of the most beautiful mountains in the entire country, if not the entire world. No matter what part of the route you’re walking on, you will get to enjoy exceptional mountain views. Few of the mountains that you’ll spot during Manaslu Circuit trekking are Manaslu, Himchuli, Nagadichuli, Ganesh, and so on. The views get intense especially when you reach higher altitude, and especially near Manaslu Base Camp, one of the breathtaking and most exciting viewpoints of the entire region.

Manaslu Circuit trekking also covers Tsum Valley, which is an essential part of Tsum Valley Trek. Tsum Valley trek is said to add that religious dimension to the entire Manaslu Region. Tsum Valley was visited by saint Milarepa in the early 15th century. He is said to have meditated in the hills and around the valley. This helped Tsum Valley and the entire Manaslu region gain a religious stature, making it a significant pilgrimage site. During your Manaslu Circuit trekking, you’ll be covering Milarepa caves, Mu Gompa, Rachen Nunnery, and so many other attractions that add religious significance to the journey.

Manaslu Conservation Area is the home to many rare and endangered species of flora and fauna. It’s a guarantee that during your Manaslu Circuit trekking, you’ll get to spot a few of them, as the entire trekking route is contained within Manaslu Conservation Area. The area is also the home to numerous other spectacles of nature like lakes, rivers, glaciers, waterfalls, and so on that are going to keep you excited and enticed throughout the trek. Needless to say, the area is also the home to numerous indigenous tribes, with their own unique culture that you must explore during your journey.

Manaslu Circuit trekking is also known as Manaslu Larke Pass trekking, as during the journey, you’re required to cross Larkya La Pass. This high altitude mountain pass is situated at an elevation of 5160 m, making it one of the highest, and probably the toughest to cross mountain pass, in the entire Himalayan range. Larkya La Pass is one of the attributes of Manaslu Larke pass trekking that make it a strenuous journey. The weather and the terrain is so extreme that if you’re not careful in terms of crossing the pass, the consequences could be fatal. Larkya La pass adds the adventure to the journey.

Connection With The Annapurna Region

Manaslu Circuit trekking route connects to Annapurna Circuit trek route especially towards the end. During the journey, you don’t just get the best of the Manaslu region but slightly touch the Annapurna region as well. You visit few of the villages there, get to enjoy few of the attractions, and definitely get to explore the Annapurna Conservation Area Project, the largest protected area in Nepal. You will come across viewpoints offering you the most amazing views of mountains like Annapurna, Machapuchhre, Dhaulagiri, and so on. It feels as if you get to watch two shows in the ticket of one.

Manaslu Climb is one of the most sought after expedition journeys of Nepal. It takes you to the top of Mount Manaslu, which is the eighth highest peak in the world. Manaslu Climb is altogether a 46 days long journey. During this time, the mountaineers trek for a duration of around 9 days, from Soti Khola to Manaslu Base Camp before the ascent, and the same way back after the descent.

The core climbing is 28 days long altogether. The feeling that one experiences after reaching the top of Mount Manaslu isn’t something that can be described in words. Though it is the eighth highest peak, climbing it is no easier than climbing Everest or any other mountain higher than it. The sense of pride and achievement that one feels after a successful Manaslu climb is unimaginable.

If you’re a mountaineering enthusiast, but have never tried Manaslu Climb, you’re missing out whole new level of thrill. Try it out to know for sure.

2. Tracking The New Trail of Manaslu Circuit Trek After Earthquake

If you’re looking to go for an exciting, adventurous and thrilling journey in the Manaslu region, whether it’s Manaslu Circuit trekking, Manaslu Base Camp trek, Tsum Valley Trek, or the toughest of them all, Manaslu Expedition, Great Nepal Treks can be an ideal partner for you. With years of experience in the field, and a superb team of travel experts working for them, they’re able to offer you the most amazing travel related services at the most attractive price.

They also make sure to involve their clients in the itinerary designing process. Their idea is to make the journey as personal as possible, catering to the needs of their clients. Great Nepal treks also offer luxury tours to destinations in countries like Nepal, Bhutan and Tibet. So, if you’re looking to spend your next holiday in any of these Himalayan countries, make sure to contact Great Nepal trek. They’ll make your holiday an unforgettable experience.