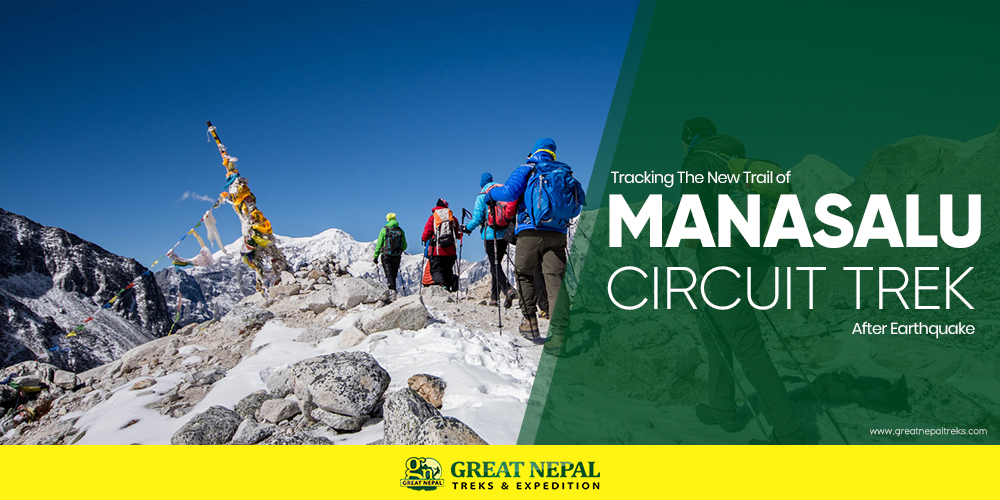 Manaslu Circuit trek route is one of those trekking paths that is closest to Gorkha district. The district was the epicenter of the earthquake that occurred in 2015. So, because of the closeness, mainly, the amount of devastation caused to the route, and especially to the villages were immense. Manaslu Circuit trek after earthquake took the longest to be reestablished, which is evident by the fact that the rebuilding process continued till the beginning of 2018. Quite like other trekking routes, the villages in the region were wiped out, due to the landslide that occurred as a result of the earthquake, and various parts of the route were erased.

The trekking activity, however, continued despite the fact that the rebuilding process wasn’t completed. As a matter of fact, people started trekking on the Manaslu Circuit trek after earthquake from 2016 itself. Though the facilities were quite rudimentary, and the routes were muddy, rocky and slippery, the trekkers went ahead, and completed the trek. Surprisingly, there were no reported incidents of accidents happening during the trek. Probably, in this regard, the trek route was really blessed. In comparison to 2016, and the early 2018, the condition of the trek route has improved tremendously. The villages are in a better state to offer teahouse facilities to the weary travelers, which is quite the progress. In short, Manaslu Circuit trek after earthquake is completely ready to be trekked upon.

Manaslu Circuit trek, also known as Manaslu Trek, is a trekking route that hasn’t been explored as much but is said to be growing at quite a pace. Many people address it as a virgin trek, due to the less number of trekkers walking on its route, in comparison to other more popular trekking routes.

Manaslu Circuit trek after earthquake connects Manaslu region and Annapurna region, and so, while trekking on the route, you’ll find a lot of attractions that the two regions share. For instance, the view of the peaks. While on the Manaslu Circuit trek after earthquake, you’ll get splendid views of peaks like Manaslu, Ganesh, Annapurna, Dhaulagiri, and so on.

Also, the people living in the two regions share similar cultures and traditions. Mostly, the two regions are dominated by people belonging to Tibetan, Gurung, Rai, Magar and Tamang communities. Now, while these communities, their cultures and traditions are quite different from each other, you’ll find a lot of common attributes in them. So what you would experience in a village in one trekking route, you could experience the same thing in another village on the other trekking route.

Few of the significant villages covered during the trek include Jagat, Deng, Samdo, Bhimtang, Gho, and so on. The route also makes its way through Larkya La Pass, a significant attraction on the trek. Situated at an altitude of 5125 m, the pass is considered to be the longest one in the entire Himalayan region.

CHANGES TO THE MANASLU CIRCUIT TREK AFTER EARTHQUAKE

Manaslu Circuit trek after earthquake has undergone significant changes, when it comes to its route structure, especial on the lower parts, between SotiKhola and Jagat. While walking on the old route, the trekkers stuck to the western side of the BudhiGandaki River, went from SotiKhola to MachhaKhola on the first day, and from Macha Khola to Jagat on the second day. However, the new trail requires the trekkers to walk on the eastern side of the BudhiGandaki River, and thus replacing MachhaKhola with Kasigaun. Since the route for the first two days of trek is different, the small towns and villages that the trekkers visit on the route have also changed. The main reasons for these changes are, firstly, the destruction of the routes caused by the earthquake that occurred in 2015, and secondly, the undergoing road construction that is said to join China and India after completion.

Now, the trekkers can choose to keep their trek short by not trekking on the entire Manaslu Circuit trek route. So, after the trekkers have made their return to Samagaon, after visiting Manaslu Base Camp, they could head west towards Ghap, instead of heading north towards Samdo. From Ghap, they could follow the same way back to Arughat or SotiKhola to end their trek.

Though Manaslu Circuit trek after earthquake, and Tsum Valley Trek start at the same point, i.e. either Arughat or SotiKhola. The route of the Tsum Valley Trek diverges a little especially when the trekkers reach Ekle Bhatti. Here, you’ll have two options, either to head northwest towards Deng, and walk on the regular Manaslu Circuit trek route, or to head northeast towards Chhumling and walk on the Tsum Valley trek route. The main attraction of the Tsum Valley trek is Mu Gompa. From here, it’s the same way back to Arughat or SotiKhola to the end of the trek.

If you want to include ManasluCiruit Trek after earthquake to your Tsum Valley trek all you need to do is, while returning from Mu Gompa, once you reach Ekle Bhatti, head northwest towards Deng, instead of heading south to Jagat. And once you’re at Deng, you can continue walking on the regular Manaslu Circuit trek route. If you wish to make your trek further extreme, include the Manaslu Base Camp trek route on your itinerary as well. You can do so by following the steps mentioned above.

Tsum Valley Trek is popular mainly as a pilgrimage trek, as there are so many Buddhist pilgrimage sites, and areas marked with prayer flags, in the region, along with numerous big and small sized chortens, stupas, prayer wheels, mani walls, and so on. The main attraction of the trek Mu Gompa is often considered to share a history with legendary Buddhist saints, namely Milarepa and Guru Padmasambhava. Milarepa especially is said to have meditated in the caves of hills and mountains around Tsum Valley, which makes the region further sacred from the Buddhist perspective.

Manaslu Circuit Trek Map ensures that you have the complete freedom during your trek, especially when it comes to customizing your itinerary to include side treks and major attractions on the route. Manaslu Circuit Trek map includes the route structure of not just Manaslu Circuit trek after earthquake but also that of Tsum Valley trek and Manaslu Base Camp Trek, along with all the attractions and challenges that you’ll come across while trekking on those routes. It helps you understand the region and the routes better. Having all that information will help you take a wise decision, which side trek you should go for and which one you should avoid.

Manaslu Circuit trek after earthquake has gained tremendous popularity, not just after the people realized that there was no danger involved in trekking in the region, but when trekkers around the world came to know about the beauty of the treks. The attractions that you’d come across on the Manaslu trek after earthquake will force you to have a soft spot for the region, and make you believe that probably the earthquake was the harshest tragedy that could happen to the area.

However, you will also be left wondering whether the earthquake actually occurred, as you’d not be able to notice a single sign, unless the guide explains it to you. The memorials, built in the memory of the dead, that you’d come across on the route could give it away. Manaslu Circuit Trek after earthquake is probably one of the best trekking options for you, as it offers you the goodness of multiple trekking routes in the Manaslu region, and that of the ones in the Annapurna region. There are so many things to do and see that you won’t be satisfied in one go, and you’d definitely want to come back for more.

2. Tracking The New Trail of Manaslu Circuit Trek After Earthquake

Great Nepal Treks offers exciting trekking packages featuring the most amazing trekking routes and itinerary from every part of Nepal. Their services are reliable, affordable, and focused towards client satisfaction. They allow their clients to customize their travel itinerary to the fullest, to meet their interest. With experienced guides and tour operators in their team, their goal is to ensure that their clients have the best possible experience. Great Nepal Treks also offer travel packages featuring the most popular tourist destinations in countries like Tibet and Bhutan. Opt Great Nepal Treks as your travel partner to make your holiday adventurous, exciting, and full of fun.