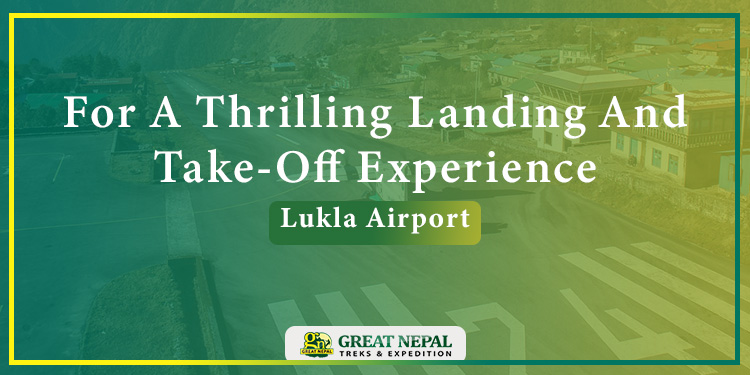 During your visit to Nepal, there are so many things that you can do, and different places that you can visit. All of them filled with attractions of various sorts. One of the most unusual attractions that you could come across, provided that you choose to trek in the Everest Region is Lukla Airport. There are so many factors that make this place one of the most fantastic locations to be at during the tour. Lukla Airport is the area where most of your journeys, which take place in the Everest region, begins.

What Makes Lukla Airport So Adventurous?

Lukla Airport which is also known as Tenzing Hillary Airport is one of the most exciting attractions in the Everest region. Every trekking journey in the region starts and ends in Lukla unless you’ve trekked all the way up to Lukla from Jiri. And so, almost all the trekkers trekking in the region come across Lukla Airport during the journey. A lot of people wonder – how Lukla airport can be an attraction, after all, it’s a small airport. And, there are multiple reasons that exist as answers to the question. Lukla Airport doesn’t just serve as an airport, but also as a viewpoint.

Without a doubt, it is one of the most beautiful airports in the world. Situated in an attractive setting, on a flat land area at the edge of a cliff, and surrounded by hills, Lukla airport, along with other parts of Lukla, offers amazing views of the area. On a clear day, it also offers the views of the mountains in the Everest Region. But this doesn’t justify its stature of being the most daring and thrilling airport in the world.

To be brutally honest, no such parameters exist on the basis of which one can claim that a certain airport is an adventurous one, or the most thrilling one among all. Similarly, there is no authority or governing body that can validate this assertion. Though different media around the world may declare their observation about a certain airport to be a fact, it is only on the basis of geographical and climatic conditions. On the other hand, words like dangerous, thrilling, daring and so on are very subjective; their definition changes as per the perception of the individual making the claim, and the thing that is being observed, in this case, Lukla airport, or airports around the world in general.

During the time Lukla landing and take-off from the airport, the passengers feel a rush of excitement and amazing fear, as they know that the length of the runway is quite short, approximately 527 m. If the pilot takes too long to make his move, well, there is a sure-shot chance for the plane to crash. Also, generally, runways are followed by open fields. However, in the case of Tenzing Hillary Airport, the runway is followed by a deep gorge. Also, the entire village is surrounded by high hills, and they are located at close proximity.

This adds to the challenges that the pilot needs to overcome to get the plane in and out of the village safely. Apart from the geographical features, there’re also the climatic conditions. The climate around Lukla is quite unpredictable. At one time of the day, it’s sunny, and at the other, it could be foggy. It is almost impossible to land the plane when it’s foggy, or when it’s raining. From 1973 up until 2019, there have been 19 plane crashes in Lukla, and most of them were due to bad climate or visibility issues.

Lukla Airport – The Beginning Of A Magical Journey

Lukla Airport opens the gates to the magical land of the Everest region, which is the home of Mount Everest, the tallest mountain in the world. The ultimate wish of trekkers who trek in the region is to get the up-close views of peaks in the region mainly Mount Everest. Probably, that’s the reason why Everest Base Camp trek is the most popular trek in the region. The journey takes you as close as you can possibly get to Mount Everest, without actually climbing the peak. It takes you to so many beautiful places and viewpoints, including the most significant one of them all, the Everest Base Camp, and Kala Patthar.

From Lukla Airport, it takes around 7 days to reach the Everest Base Camp, and around 4 days to make the way back. During the Everest Base Camp trek, the trekkers cover beautiful villages like that of Namche Bazaar, Tengboche, GorakShep, and so on. These are known not just for their natural beauty but also for the cultural heritages, for instance, Tengboche Monastery, and the lovely people who reside in these settlement areas, who offer different services to the tourists visiting these places. The Sherpas, who are local to the region, are known for their endurance, and their ability of climbing peaks.

Everest Three Pass trek is probably the lengthiest and the most difficult journey in the Everest region, and quite like any other trek, it also starts from Lukla Airport. Everest three high pass trek is sort of like an amalgamation of the major treks and attraction of the Everest region. It features all the exciting places and viewpoints of Everest Base Camp Trek, Gokyo Lake Trek, and more. The main attractions of the journey are the three high altitude passes – Kongma La, Cho La, and Renjo La. Quite excruciating and challenging to cross, the elevation of these passes are 5535 m, 5330 m, and 5345 m respectively.

Gokyo Lake Trek is one of the most beautiful treks in the Everest region. Gokyo Lake trek also starts from Lukla Airport, and the journey takes you to the beautiful Gokyo Lakes. Apart from this aesthetically pleasing complex of lakes, you also cover attractions such as Everest Base Camp, Gokyo Village, and Gokyo Ri, a mini-mountain that the trekkers climb on during a side trek. It is said to offer amazing views of peaks in the region, including that of Mount Everest. You also cover numerous villages that you miss out during the Everest Base Camp trek like Machhermo, PhortseTenga, Dole, Thame, and so on.

Whether you’re going for trekking or expedition journey in the Everest region for the sake of thrill and adventure, or just to click few really good Mount Everest Pictures, there is one place that you’re bound to come across, during the start and end of the journey, and that is Lukla Airport. There is a different kind of dare and thrill that is associated with this airport. It is for a reason that Lukla Airport is considered as one of the most dangerous airports in the world. Keep your pulses and heartbeat at check during Lukla airport landing and take-off, it will make you experience the thrill of a lifetime.

You would not want to miss the following packages for trekking in Everest region:

Great Nepal Treks is amazing trekking and expedition, service provider. With years of experience in the field and the most dynamic team of travel experts, Great Nepal trek offers you affordable, trustworthy, and on-time tour related services.

Customer satisfaction is their main motto, as they leave no stones unturned when it comes to giving their best in terms of serving their clients. They involve their clients in the itinerary designing process, which results in making the journey quite personal, catering to the needs of the clients. If you’re looking to have the most amazing trekking and expedition experience or want to go for luxury tours, in the hills and mountains of Nepal, contact Great Nepal Treks today. With Great Nepal Treks by your side, your holidays will never be the same again.