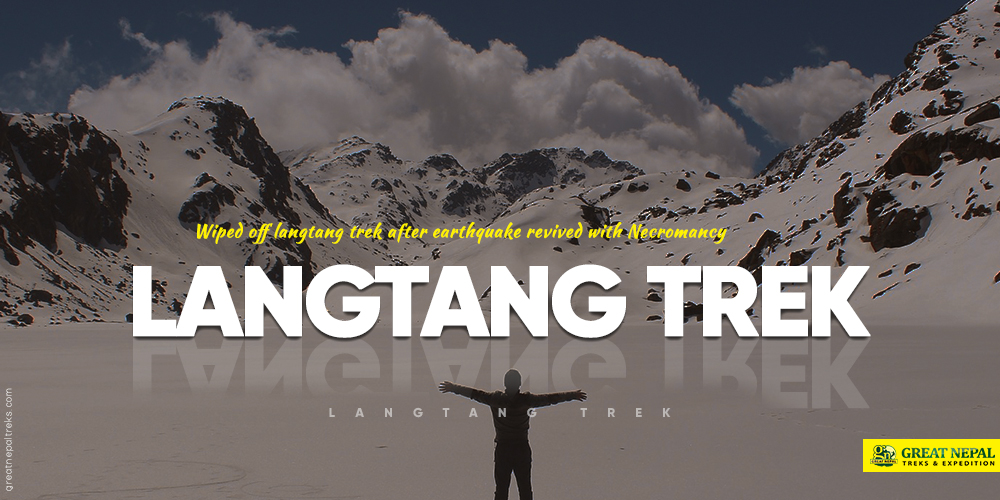 If you go to the Langtang region at present, especially on the Langtang trek after earthquake, you can’t help but wonder that everything seems changed. The size of the crowd, mainly tourists, has doubled, even tripled, the facilities are updated, and everything appears bigger and better. Believe it or not, it’s all due to the earthquake. Langtang Trek Nepal, which was once wiped off, as a result of the earthquake, seems to have been revived to almost twice its original capacity with necromancy.

Langtang Trek after earthquake is as an example of the idea that Trekking in Nepal is a flourishing tourist activity, and an industry altogether. Despite all the damages caused to the villages, the people, and the route, Langtang Trek after earthquake stands stronger and bigger than ever. What’s quite surprising is the fact that the recovery process didn’t quite take that long. And within a few months after everything was re-established, the tourists started flowing in, if that’s not necromancy, you can’t be sure what is.

Langtang Trek is one of the most popular treks of Nepal, as it has so many attractions that you’re bound to love. Trekkers also tend to go for Langtang Trek even a second or a third time as it is filled with goodness of all kinds, religious, cultural, natural, historical, and so on, that can’t possibly be covered in one attempt. Apart from these, there are so many possibilities in the region, when it comes to side trips and alternative routes, that you go for one and you’d definitely miss the others.

Langtang Trek, also known as Langtang Valley Trek, includes 6 days of core trekking, out of which, one day is assigned for acclimatization. Langtang Valley trek distance is around 115 km, and during the trek, the trekkers stop at villages like Syabrubesi, Lama Hotel, KyanjinGompa, Langtang Villages, and so on. Each one of them are beautiful, with so many natural and cultural elements that will make your stay here quite pleasant. KyanjinGompa, mainly, is well known in the entire region as the most significant Buddhist pilgrimage site.

There are so many extension possibilities in the Langtang trek. By adding a couple of days to your trek, you can add attractions like Gosainkunda trek to your journey, which is a complex of high altitude lake known for being religiously significant for the Hindus. It receives devotees from all across Nepal, and mainly the Indian sub-continent. In the same way, you can add Ganja La and Lauri Binayak La to the trek, which are high altitude mountain passes, situated at an altitude of 5122 m and 4610 m respectively.

In the process of extending your trek, you’ll also come across villages like Tatopani, Rasuwagadhi, Melamchi, and so on, and religious sites like Shin Gompa, which will definitely make your trek more exciting. KyanjinGompa and Ganja La Pass trek can be some other great options for you.You can also opt for Tamang heritage trail for a terrific nomadic experience. It is is a less explored area of the Langtang area which has recently been opened for the world. The people in this area are mostly Tibetans who came from Kerung in Tibet and settled in Nepal. The Langtang Heritage Trail is an off beaten track which highlights ancient culture and lifestyle, combining it with picturesque views and soothing baths in the natural hot spring. It also covers the culture, religion and daily lifestyle of Tamang community.

Langtang Valley trek route, along with the other alternative trek routes are a part of the Langtang National Park, which is the first Himalayan National Park of Nepal, and also one of the most diverse ones. On your trek, you’ll come across plant species such as oak, maple, pine, rhododendron, and so on, and animals like Red Panda, Rhesus Monkey, Himalayan Black Bear, Himalayan Tahr, and so on.

The park is also the home to few of the highest mountains in the country like LangtangLirung, DorjeLakpa, Shisha Pangma, and so on, and during your trek, you’re sure to come across few of the numerous viewpoints that offer the best possible view of these great white giants.

On its own, Langtang trek is quite a moderate level trek. Lasting for only 6 days, and taking the trekkers to a maximum altitude of 3850 m, which is that of KyanjinGompa, with the exception of TserkoRi, whose altitude is 5000 m, generally trekkers find Langtang Valley trek quite easy. One can choose to skip the ascension of TserkoRi, which is conducted during the day of acclimatization.

Having said all that, you can increase the Langtang Trek difficulty level by making certain tweaks to your itinerary. You can add side strips and extensions to your trek, therefore increasing the number of attractions, and therefore raising the difficulty level of your trek. For instance, by adding Gosainkunda to your trek, you extend your trek duration to up to 12 days. Also, the highest altitude covered during your trek shifts to 5122 m, which is that of Ganja La.

Since the trek duration increases, you’ll now have to walk through rougher and more extreme terrain. With the rise in the altitude, the climate, and especially the coldness, gets worse making you have a hard time. And finally, there’s altitude sickness. Now, this is something that can trouble you even if you don’t extend your trek. It can cause you to suffer from problems like nausea, headache, low appetite, dizziness, and so on. But like any other disease, its effect can be reduced by taking pills, food that are light on stomach, and by avoiding things such as cigarette and alcohol.

A little preparation like daily walking, running, or any other form of cardio can make your experience walking on these hills quite pleasing. Also, make sure to visit your doctor, before you come for the trek, especially if you’ve had a history with heart issues and breathing problems. Altitude Sickness can worsen these conditions, and give you a really hard time on your trek.

Langtang trek after earthquake in 2015 was greatly impacted. So many locals and tourists lost their lives. Villages were swiped away due to the landslides that occurred as a result of the earthquake. The routes disappeared, and were filled with rubbles and debris from the hills. And most importantly, for quite some time, there were absolutely no visitors in the region.

Tourism is one of the main occupation here that gives the people in the region bread and butter. Without the tourists and the money coming from them, the lifestyle of the people is widely disturbed, and that’s what happened for quite some time after the earthquake.

However, things didn’t stay the same for that long. The people, especially the locals realized that they have to do something. So, with the help of the government, and the funds collected from all over the world, people started rebuilding the villages. They did it with the sense of making everything bigger and better, and they were successful within a year.

In this time, the trekking routes were either cleared or re-routed, ensuring the safety of the trekker walking on them. In the same way, the villages on the route were built in a way that they’re able to handle more guests during peak trekking season. The earthquake happened in the year 2015, and since 2016 itself, trekking services were re-offered.

It took some promotion to help the route get busy again with the flow of tourists, but it all worked well. Currently, the number of tourists visiting the region have almost doubled, and the popularity of Langtang Trek after earthquake has grown tremendously.

The best way to go for Langtang Trek after earthquake is to do so with a Langtang Trek guide. With the knowledge, experience and expertise that the Langtang Trekking guide possesses, you can be rest assured about having the best possible time on the trek. You will get to know the significance of all the religious heritages that you’ll come across, the name and the height of all the mountains that you’ll see, and top of that, all the interesting stories and folk tales. You don’t want to miss out on them.

Most importantly, a trekking guide would motivate you to do better, to take an extra step, and give you all the tips that you’d need to feel comfortable. When you’re in the hills, there’s nothing more relieving than a good company, especially when you’re suffering from altitude sickness.

Langtang Trek after earthquake is a great choice for trekking in Nepal. Though it was quite unexpected, the popularity of this trek has risen tremendously, especially after the earthquake. Currently, the number of trekkers going on Langtang trek after earthquake is on par other popular treks like Annapurna Base Camp Trek, Annapurna Circuit Trek, and even Everest Base Camp Trek. So, this alone should give you the idea how special this trek has grown to be. Undoubtedly, Langtang Trek that was once wiped off due to earthquake seems to have revived with necromancy, and has gotten better than ever.

Great Nepal Treks is one of the best trekking companies that offers you interesting travel packages to the most popular tourist destinations of Nepal, at exciting prices. With experienced professionals by their side, their services are reliable, and focused on client satisfaction. Great Nepal Treks also offers travel packages to most travelled tourist destinations in countries like Bhutan and Tibet. So, if you’re planning to go for a tour to any of the above mentioned places, especially to Langtang Trek after earthquake, pick Great Nepal Treks as your trusted travel partner.