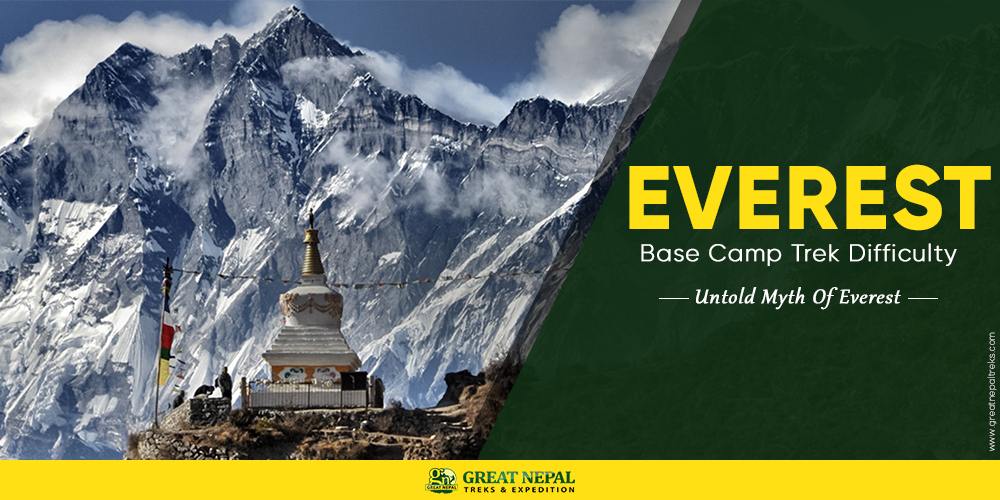 Everest Base Camp is one of the most popular trekking routes in Nepal. What makes it so popular are the numerous settlement areas that the trekkers get to explore during their trek, and the various natural spectacles of Sagarmatha National Park that comprises the major portion of the trekking route.

Trekkers also get to enjoy the views of few of world’s tallest peaks throughout their journey. But most importantly, it’s the closeness to the world’s tallest peak, Mt. Everest, that the trekkers feel when they reach the Everest Base Camp that makes them prefer this trek over others.

Now, there’s a certain level of difficulty associated with this trek. As the trek route is composed of various rough terrains and because it takes you to altitude as high as Kala Patthar, which has an altitude of 5545 m, the Everest Base Camp trek difficulty level could be considered challenging.

But this doesn’t mean that moderate level trekkers can’t go for this trek. With a little bit of preparation, anyone with a decent trekking experience can reach Everest Base Camp in sound health, despite the high Everest Base Camp trek difficulty. In this blog, we’re going to talking about factors that make Everest Base Camp Trek challenging.

Before jumping into the main point, if you want to learn more about Everest Base Camp. We have discovered more topics for you.

3. How long does it take to climb Mount Everest

4. All You need to know about Everest base Camp Trek

Everest Base Camp Route starts from Lukla and makes its way to Everest Base Camp. From there, it’s the same way back to Lukla. On various occasions, the trekkers take side trips to surrounding villages. One of the most significant side trip is conducted to reach the top of Kala Patthar, a mini mountain that offers excellent views of the mountains in Everest Region.

Trek to Everest Base Camp lasts for a period of 11 days, out of which 2 days are spent acclimatizing in Namche Bazaar and Dingboche. Since Everest Base Camp route develops in Sagarmatha National Park, one of the most diverse national parks of Nepal, the trekkers will get to see various rare species of birds, animals and vegetation. The trekkers will also get to visit Tengboche, which is the home to Tengboche Monastery, the most important Buddhist pilgrimage site of the region.

Everest Base Camp Trek is also one of the most flexible trekking routes. It can be modified to include various interesting spots in the Everest Region, for instance, Gokyo Lakes, which is a complex of high altitude mountain lakes. In the same way, the trekking route can also be modified to include the three significant high altitude passes in the region popularly known as Everest Three Pass Trek, namely Cho La, Kongma La and Renjo La.

It is entirely up to the trekkers, and their trekking partner, to makes the trek to Everest Base Camp as diverse, long and challenging as they want. They could go for a pretty easy one, or a gruesome one, it’s all up to them. Upto an extent, Everest Base Camp trek difficulty depends on the trekker.

FACTORS CONTRIBUTING TO ITS DIFFICULTY

Despite the modification options, there exists the core trekking route that the trekkers need to walk upon to reach the Everest Base Camp. This core Everest Base Camp trek difficulty level is challenging, and there are certain factors that contributes to its toughness.

In terms of covering this huge distance, we come across various landscapes like river banks, forest areas, rough stony terrains, steep climbs and descends, and so on. These contribute to raising the Everest Base Camp trek difficulty level. Unless the trekker has a decent walking habit, it might be quite challenging for them to make their way through all this.

Another factor that adds to Everest Base Camp Trek difficulty level is Everest Base Camp Altitude Sickness, or any other form of sickness that the trekkers might suffer from in case they don’t take care of their health. The high altitude areas of Everest Base Camp trek route act as alien territories for many trekkers, as most of them are not habituated to living in such extreme climates.

It’s cold, and moreover, there’s lack of oxygen in the air. So, it takes time for the body to get used to all this, and that’s when they suffer from Everest Base Camp altitude sickness. The best thing to do is to consume food items and medicine that help prevent the sickness, and to take enough rest. This is the reason why generally two days are designated for acclimatization, so that the trekkers’ bodies can get used to their surrounding environment.

Quite like other trekking routes, one way to increase the Everest Base Camp trek difficulty level is to go for Everest Base Camp trek self guided. Generally, trekkers tend to go for trekking journeys through trekking partners. The trekking companies make sure that they handle all basic necessities like food, accommodation, and potters. All this makes the journey quite easy for the trekkers. All that they need to do is walk, and that is the biggest challenge for them.

When you embark on the journey yourself, where you have to manage all the above mentioned things yourself, along with the tough walk, with all that extra weight, the Everest Base Camp trek difficulty increases. The difficulty starts even before the trek begins, when you have to take care of all the paper works yourself, which the trekking company takes care of generally.

Everest Base Camp trek takes you through few of the most extreme terrains and climatic conditions in the world. So, the trekkers needs to be careful about their health and their activities throughout the trek so as to prevent any dangerous situations. They shouldn’t just be concerned about their journey, but also take into consideration their past medical records, before signing up for the trek. An appointment with a doctor before the journey is something that’s recommended.

There have been quite a few Everest Base Camp trek deaths, but their number has been extremely low. Only 3 to 5 out of 30,000 trekkers, who trek in the region in a year, die, and the reason is altitude sickness in almost all the cases. Altitude sickness doesn’t really kill people, it simply intensifies health conditions like problems related to the heart or breathing that has troubled the patient in the past. The sickness makes the condition more severe, causing the patients to die.

So if you’re someone who’s never had any major health issue is the past, all you might feel is dizzy or nauseated during the trek. However, things might get intense if you’ve had such problems, and if you’re ignoring them, and taking the high altitude and climate lightly. No deaths have been reported in the region, with the reason being anything other than altitude sickness.

HOW TO LOWER EVEREST BASE CAMP TREK’S DIFFICULTY LEVEL

Trek to Everest Base Camp is a difficult thing to do. However, a trekker can lower the difficulty level by taking certain things into consideration. Firstly, he needs to seriously consider the trekking route, the altitude and terrain. He needs to understand whether his health condition is totally up for it, and if it isn’t, well there are so many other easier but equally adventurous trekking routes that he can go for.

Secondly, he needs to choose a trekking agency that ensures A-grade services. The agency should take care of all your documentation and other preparations before going for the trek. And during the trek, it should try to make your journey as comfortable as possible. The company also needs to be clear about what you want, and should be able to orient you clearly about what you should and shouldn’t do.

And finally, be careful and observant throughout the trek. Enjoy your trek, and also learn about things that can make your walk easier. Quite a few trekkers tend to drink alcohol during the trek, which is something that needs to be avoided, as it invites altitude sickness. So, be concerned about things as such, and make sure to follow all the rules.

Without a doubt, Everest base camp trek difficulty level is off the charts. Trek to Everest Base Camp presents all these challenges to you that contributes to making your trek exciting. Sometimes, you’re able to handle it, and sometimes, you’re not. Despite its toughness, you can get the best out of Everest Base Camp trek. All you have to do is follow the tips mentioned above, and listen to your guide.

Great Nepal Treks is one of the best trekking companies of Nepal. It offers trekking packages to the most sought after trekking destinations for the international as well as domestic tourists at exciting prices. Opt for Great Nepal Treks as your true trustworthy trekking partner in Nepal.