When you’re at Baudhanath Stupa Nepal, you feel nothing but peace. The cool wind blowing and making the prayer flag flow in a rhythm. There are hymns coming from every direction, but also, you feel a certain quietness. Kathmandu is a chaotic city, and there’s absolutely no doubt about it. It is amusing to realize that there exists a place like Baudhanath Stupa Nepal that whispers prayers amidst this chaos, and somehow, these prayers reach the souls of the ones who are the devotees. Visiting Baudhanath Stupa Nepal is a wonderful experience overall..

Baudhanath Stupa Nepal is one of the most prominent religious and cultural heritages of Nepal. Boudha Stupa is regarded highly not just by the Buddhists, but also by other Nepalese, no matter their religion or background. Boudha Stupa is one of the most visited religious heritages of Nepal as well. No matter what part of the world the tourists come to Nepal, no matter their purpose, they make sure to make a visit to Baudhanath Stupa. Baudhanath Stupa is an excellent example Buddhist art and architecture. The Buddhist stupa which is a part of the complex is situated on top of a mandala. For the Tibetan Buddhists, this Buddhist stupa is of a very high importance. Baudhanath Stupa Nepal is in fact a complex of many Buddhist heritages. 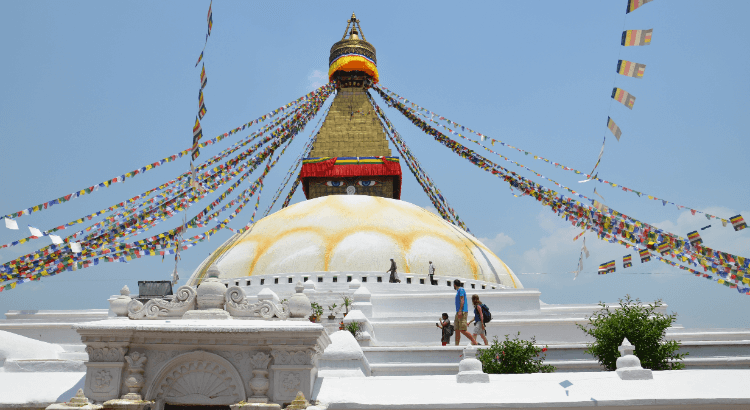 How To Get To Boudhanath Stupa

Before you plan to visit Boudhanath Stupa, it’s important that you know the answer to question like, how to get to Boudhanath Stupa. Now, if you’re a person who doesn’t mind riding public vehicles, you will get buses and microbuses from different parts of the valley, mainly Ratnapark area. If you’re anywhere on the ring road, you’ll find buses headed towards the direction of Baudhanath Stupa Nepal. If you’ve reached as close as Chabahil, which is the nearest roundabout to Baudhanath Stupa Nepal, you’ll find all kinds of vehicles offering you a ride.

Why Are There Eyes On The Boudhanath Stupa

It’s interesting at times to know about symbols. Most religious heritages are symbolic and so they convey one or the other meaning. So, to answer the question, why are their eyes on the Boudhanath Stupa, well, it’s a symbol. The eyes are a symbol of Buddha’s wisdom and compassion. Right above the two eyes is a third eye, which is believed to send cosmic rays to the heaven. These rays, once they reach the heaven, interact with the heavenly beings, and invite them to come to earth and witness the actions and listen to the teachings of Buddha.

When Was Boudhanath Stupa Built

Now, despite the fact that there are so many mythological stories regarding the origin and establishment of Baudhanath Stupa Nepal, there are historical evidence on, when was Boudhanath Stupa built. Baudhanath Stupa Nepal was founded during the reign of Sivadeva, a prominent Lichchhavi king between the late 6th century to the early 7th century. The entire Baudhanath Nepal complex was built in stages and numerous rulers are to be credited for it. For instance, emperor Trisong Detsen of Tibet is also credited with the construction of Boudhanath Stupa during late 8th century, and so is Yolmo Shakya Zangpo from Helambu.

Things To Do Around Baudhanath Stupa

Baudhanath Stupa is one of the most preferred places to visit not just by the tourists, but also by the locals. It is a weekly thing for youngsters around the area to visit the complex and spend quality time there. Inside the complex, you will find so many eateries, from small to big, serving all kinds of delicacies. During your visit to the Baudhanath complex, you could spend a considerable amount of time here. In the same way, in or around the complex, you will find so many shops selling different kinds of items. From artifacts and accessories to locally produced clothes, and so on. Baudhanath complex area is a great place to shop. You’re sure to find one or the other item to take back home as a memento of your holidays in Nepal. Baudhanath complex is the ideal place for you to visit if you’re a religious person. It doesn’t really matter if you’re a Buddhist or not. You can visit a few among the 50+ gompas that are a part of the complex. You can light the butter lamps in those gompas, pray and meditate in the peaceful setting here. It is the best place for you to know about Buddhism altogether.

Buddhism is a religion that started in Nepal. It was started by Gautam Buddha who also happens to be the founder of Buddhism. Gautam Buddha was born in Nepal, in a place called Lumbini. There is a very interesting legend that tells the story of how Gautam Buddha transformed from a prince to a sage that attained salvation, and in order to help others attain the same, founded the religion known as Buddhism. Buddhism is the second most followed religion in Nepal after Hinduism. It’s spread in the entire country, with its followers living in every corner.

You can learn more about Lumbini, the birth place of Lord Buddha in our blog titled Travelling To The Birthplace Of Lord Budddha | Lumbini Tour 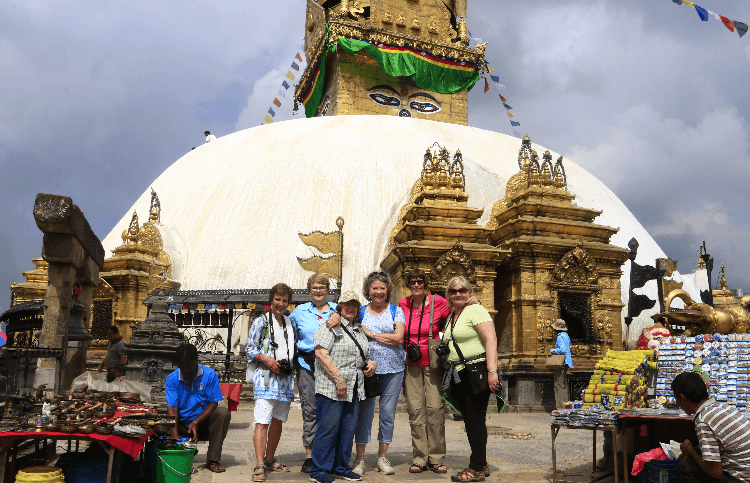 To explore the world heritage sites in Kathmandu, you can check our package: Kathmandu UNESCO Heritage Site Tour – 1 Day

No matter why you’ve come to Nepal, you’d definitely spend a couple of days in the capital. During this time, it is recommended that you visit the UNESCO World Heritage site located in Kathmandu. If you’re very busy, and unable to cover them all, try to visit at least the Baudhanath Stupa Nepal. You will absolutely adore the peace and serenity that you’d get to experience here. And the most interesting thing is that this quietness that you will experience exists despite all the crowd and the noise. Rejoice the hymns and sounds that would flow around you at the stupa. 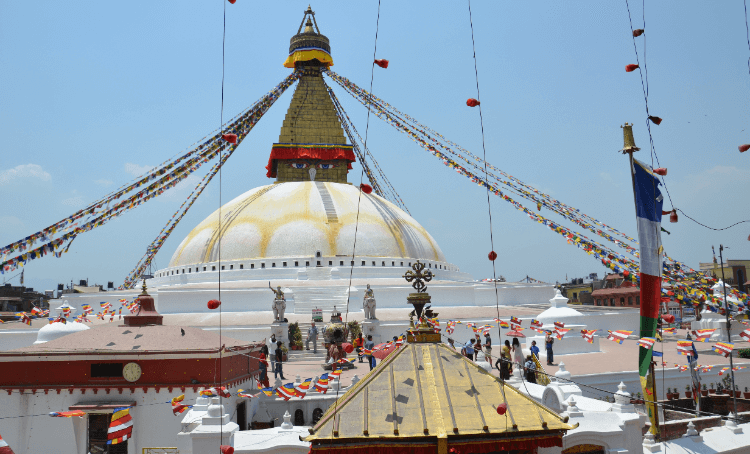 Great Nepal Treks is a reliable, affordable and experienced travel and tour operator. They specialize in trekking and expedition, however, if you’re someone who loves laid back experiences during the holidays, you could choose one of their luxury tour options, like helicopter tours, mountain flight, jungle safari, food tours, cultural tours, and so on. Their itineraries feature the most popular and off-the-beat destinations in countries like Nepal, Bhutan and Tibet. They even customize their itineraries for their clients. Their intention is to make the journeys as personal and close to the heart of the clients as practicable. They seek 100% client satisfaction. If you’re looking to visit any of these places during your upcoming holidays, and get involved in any of these activities, make sure to contact Great Nepal Treks.

If you’re not quite sure what places to visit during your vacation, you could contact the agency for consultation. It’s a guarantee that you’re going to love your time with them by your side, taking care of all your needs. You’d surely want to pick them as your travel partner on your next visit.